Regulation of cell phenotype by biomaterials

Cell adhesion mediated by integrin receptors plays and essential role in regulating a wide variety of cell phenotypes, including proliferation, apoptosis, endocytosis and the differentiation of stem cells. For example, keratinocytes that contribute to the homeostasis of the interfollicular epidermis, in skin, adhere to the basement membrane that delimitate the boundary between the dermis and the epidermis. Perturbation of keratinocyte adhesion has a strong influence on fate decision and tissue architecture, in vivo with diseases such as cancer or Epidermolysis Bullosa, and in vitro. In addition, it is emerging that, in addition to the biochemical composition of the extra-cellular matrix to which cells adhere, cell fate is also regulated by physical, mechanical and geometrical cues.

Our work focuses on the understanding of how the physical properties of the micro-environment, and in particular the mechanics and geometry of the adhesive landscape, impact on cell adhesion and associated phenotypes. In terms of mechanical properties of the extra-cellular matrix, we investigate how the nano-scale mechanical properties of biomaterials can be designed to allow the long term expansion of stem cells in vitro and their controlled differentiation. In addition, we study how cell adhesion and stem cell differentiation are controlled by the geometry of the adhesive landscape, using combinations of surface functionalization and patterning. At the nano-scale, we study how this allows the control of the formation and dynamics of focal adhesions, the complexes of proteins responsible for the generation of the tensile cytoskeleton controlling cell spreading. At the micro-scale, we study how patterns of extra-cellular matrix allow the control of cell shape, polarity and how in turns this affects behaviours such as stem cell differentiation. 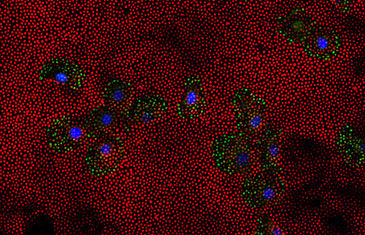 How cells sense their physical micro-environment is still elusive. Considering the importance of cell adhesion for regulating cell phenotype, this has important implications for regenerative medicine. We investigate some of the processes via which cells are able to sense the mechanical and geometrical adhesive landscape. In particular, it is emerging that focal adhesions play an important role as nanoscale mechanosensors able to “translate” the mechanical and geometrical properties of the extra-cellular matrix on which they adhere into signalling events that lead to the alteration of cell phenotype.

It is well documented that cell phenotype is strongly influenced by changes in matrix compliance. For example mesenchymal stem cells were shown to differentiate into different cell lineages, depending on the mechanical properties of the matrix on which they are cultured. Similarly, we found that the fate of epidermal stem cells was regulated by the stiffness of the extra-cellular matrix. However, our work suggests that this occurs at the nanoscale rather than in the bulk. How cells are able to transduce such mechanical signals into signalling events is not clear, and we investigate the role of focal adhesion as sensors of such physical properties of biomaterials, at the nanoscale. In addition, we found that the nanoscale geometry of adhesive molecules (for examples biomaterials presenting patches or fibres of extra-cellular matrix with diameters ranging from 100 nm to 1 μm) was able to direct the differentiation of stem cells and that this was mediated by changes in the dynamics of focal adhesion assembly and disassembly. Our work in this area focuses on studying the molecular basis for such nano-scale geometrical sensing.

Controlling the emergence of complexity and organoid formation

Being able to recreate in vitro some of the complexity that tissues typically display in vivo is an important challenge for the fields of tissue engineering and regenerative medicine. Artificial micro-tissues and organoids have important implications not only for the improved understanding of fundamental biology and developmental processes that they may bring, but also because they pave the way of a new generation of model systems for normal and diseased tissues for testing the efficacy of drugs and treatments. Importantly, such micro-tissues can be generated with cells derived from patients, which are potentially more relevant for predicting the efficacy of treatments and offer new opportunities in personalised medicine.

Depending on the type of targeted tissue, two main strategies have been explored in our group to control organoid formation. In the case of epithelial tissues such as the interfollicular epidermis, we explored the use of micro-patterning of 2D substrates, using micro-contact printing and polymer brushes, to control the formation of cell cluster and their assembly into higher hierarchy structures displaying defined compartments (e.g. differentiated vs. stem cell compartments). In the case of tumours and vascularised tissues, we explore the use of peptide-based hydrogels, photo-patterning and microfluidic systems to generate 3D organoid structures mimic the architecture and complexity of the derived tissues found in vivo.